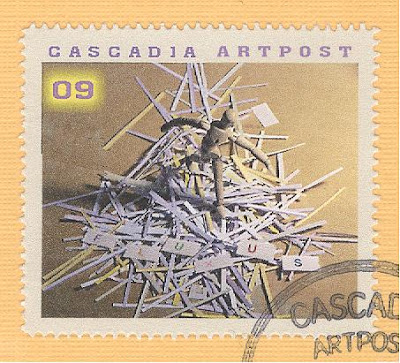 The Fluxus movement - the word "Fluxus" means literally "to flow" - creates art directly from the world and invites the audience to participate directly in perception, cognition, and creation.

This second Fluxus commemoration by Cascadia Artpost was released on a "Fluxus Card" designed from an arithmetic flash card originally intended as a teaching tool for math lessons in grade school. The flash card was part of a set discovered in an antiques store in Edmonds, Washington in January 2009. The bendable figure shown on the artistamp is shown in an evening pose striding through some postcard trimmings on the Cascadia Artpost layout table.
Posted by Jack at CASCADIA ARTPOST at 11:19 AM