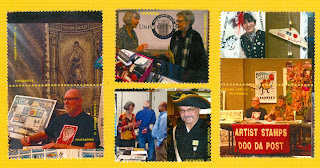 Cascadia Artpost created a sheet of artistamps following the Artistamp Artists Reunion & Philatelic EXposition held on 10 November 2012 as its POSTAARPEX issue. POSTAARPEX features photos taken by AARPEX participants Jennie Hinchcliff, Jack Lattemann, and Kathleen McHugh to record the interactions of artists and the public at AARPEX. Illustrated above are six stamps from the sheet.
Posted by Jack at CASCADIA ARTPOST at 9:45 AM 3 comments: 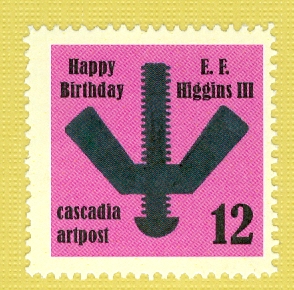 Cascadia Artpost honored the birthday of E.F. Higgins III, long-time creator of artistamps, by releasing a multicolored sheet displaying the silhouette of a "wingnut." Higgins' birthday on 10 November coincided with the all-day event AARPEX (Artistamp Artists Reunion & Philatelic Exposition) held in Seattle, Washington USA. Cascadia Artpost presented Higgins with a framed sheet of the birthday artistamps at a dinner with AARPEX participants that evening.  Higgins has used the wingnut as an icon for his Doo Da Postage Works. Making hundreds of stamps since the 1970's, Higgins lives in New York City with summer stints in Elberta, Michigan. He can be found on the internet at http://efhigginsiii.com/index.html .
Posted by Jack at CASCADIA ARTPOST at 9:42 AM 1 comment: 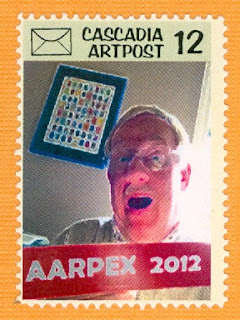 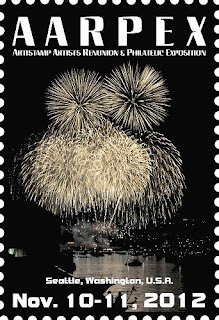 
Cascadia Artpost produced this slightly reformatted version of an AARPEX commemorative created for a composite sheet of stamps produced jointly by AARPEX participants and printed by Triangle Post. Sheets of the Cascadia Artpost AARPEX commemorative were specially delivered to AARPEX participants on the morning of the event.
Posted by Jack at CASCADIA ARTPOST at 9:39 AM 1 comment: