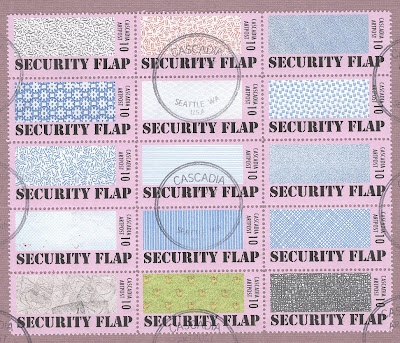 Security flaps have come to dominate U.S. media attention. We are a nation preoccupied with security. The latest attempt to ignite explosives on an airliner destined for the United States has precipitated another round of recriminations and ruminations about security. Commentators such as the scholar Chalmers Johnson say that this is the natural cycle of blowback, retaliations and counter retaliations to the American overstretch of maintaining an empire of a thousand military bases around the world. Cascadia Artpost calls attention to the latest Security Flap by reproducing the patterns found on "security envelopes" carrying mail art received during 2009. What does security mean for you?
Posted by Jack at CASCADIA ARTPOST at 6:17 PM No comments: