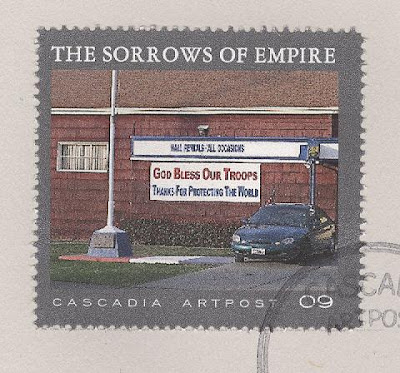 Several years ago, while waiting at a bus stop across our city in the West Seattle neighborhood, we were simultaneously fascinated and shocked to see a large sign on the side of the American Legion Hall reading, “God Bless Our Troops, Thanks for Protecting the World.” A week later, we returned with a camera to document the sign. The sign is still there.

Shocked because of the blatancy of the expression of American exceptionalism, the underlying assumption being that the United States has a moral and divinely sanctioned right to occupy the world with over 700 military bases on the pretext of protecting the world’s peoples against… what, exactly?

Fascinated because so seldom do most Americans question why the United States has a larger military budget than the next 25 countries combined, or see this global military presence as anything other than a natural extension of military bases in Alaska and Hawaii, let alone as the enforcer of a global empire. The great American theologian Reinhold Niebuhr criticized “our dreams for managing history” as doomed to failure. Andrew Bacevich, in his 2008 book The Limits of Power, The End of American Exceptionalism, cites a widespread sense of entitlement for maintaining the American way for life, founded on material consumption and individual autonomy. The sorrow is the futility of this pursuit: militarily impossible, politically threatening to democratic institutions, and economically untenable. Yet, to question these premises is to be exiled outside the boundaries of allowable political discourse in the United States. What political commentator Tom Englehardt calls “the language of empire” works to undermine any attempt at discourse.

However, reality is conspiring to erode the ability of American political elites to continue the course. The global economic crisis and the disappearance of trillions of dollars of wealth are raising the specter of national financial ruin and accelerated economic decline.

Can we begin to see the world and define our own possibilities differently? The first step is to truly see differently what we so easily have taken for granted. In believing we are capable of doing so lies hope. That’s what this artistamp seeks to do.
Posted by Jack at CASCADIA ARTPOST at 9:54 PM No comments: