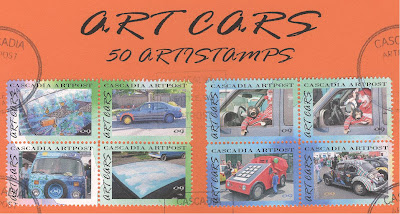 The culture of the United States has been described by some as a "car culture." Unique in the world, the transportation infrastructure and urban form of the U.S.A. since the early 20th century has overwhelmingly been developed around a single mode, the private automobile. Owning and driving one's own car is a preoccupation of most teenagers here as a declaration of independence. In most metropolitan areas of the U.S., only 10% of all households do not have at least one car available. Advertising to induce new car purchases is incessant on commercial television. Dependence upon the car for individualistic mobility by most Americans is a given. The most popular weekly program on National Public Radio stations is a show called "Car Talk." So embedded is the automobile in the American psyche, one could characterize many Americans as car crazy.
Some people do not take their automobiles quite so seriously. They decorate their cars in imaginative color schemes and designs, sometimes affix figurines or toys to the bodies or dashboard, and often modify the original body into diverse forms such as a dragon, a telephone receiver, or a power boat. In 1974, a countercultural performance group named Ant Farm buried a set of big-finned Cadillacs nose-down in a field along Route 66 near Amarillo, Texas as a statement mocking "car culture." Nowadays, art cars do not seem so exceptional, but they still attract attention and comment. In the traffic congestion so prevalent in Seattle, it is always fun to see an art car on the street.
Cascadia Artpost honors the appearance of the art car in American life in the issuance of a sheet of 50 artistamps (only eight are shown here). The images appearing on the stamps were taken at the art car show held during the June 2008 Fremont Street Fair (Fremont is a city neighborhood in Seattle adjacent to the Ballard neighborhood that is the home of Cascadia Artpost), plus the Honda art car in the process of creation by my spouse. May you too enjoy these mobile images of artistic expression.
Posted by Jack at CASCADIA ARTPOST at 6:46 AM 3 comments: