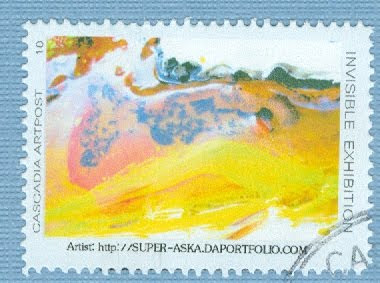 Cascadia Artpost received an invitation from the Australian artist Aska requesting our participation in a global "Invisible Exhibition" by responding in some way to the enclosed photo of a portion of one of her paintings. Aska's artwork can be viewed at http://super-aska.daportfolio.com/.

The photograph was scanned and then edited in Adobe Photoshop Elements, then imported into Corel Draw X4 to design the artistamp. Four rounds of editing were necessary to produce color hues that were close to those in the photograph. Cascadia Artpost sent ten sheets of artistamps to the artist for her use.

The resulting artistamp calls attention to Aska's website, and is the first of an intended series of artistamps with the theme "Invisiible Exhibition" that will feature unusual and interesting graphic images.

If you have an unusual graphic image that you would like to see turned into stamp art, please send the image to Cascadia Artpost, 2649 NW 64th Street, Seattle, WA 98107-2456 U.S.A. Credit will be given to all contributors.
Posted by Jack at CASCADIA ARTPOST at 12:40 PM No comments: 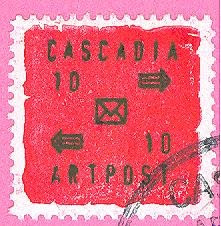 In late April 2010, the computer available to Cascadia Artpost was in a repair shop to address a boot-up problem encountered in the course of upgrading to Windows 7. Since the computer was not going to be back in time for the May Day weekend, we decided to publish an artistamp by other means without use of a computer. This May Day artistamp was produced as a rubber stamp impression.

The red background was applied as a first step by using a solid rubber stamp block image fitting a 1 inch by 1 inch perforation. In the second step, the typography and symbols were composed as a small custom handstamp and individual impressions were made by hand to perforated sheets of 70 stamps. Given that each image was created individually, each artistamp had variations in the impressions.

The May Day stamp mailed on 1 May 2010 on a plain red card honors the day of working people everywhere.
Posted by Jack at CASCADIA ARTPOST at 12:32 PM 1 comment: 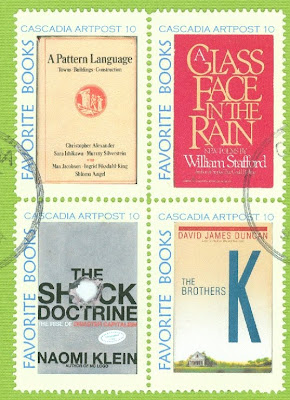 In response to a mail art call sponsored by the Paint Rock River Valley Postal Authority, Cascadia Artpost created a block of four artistamps calling attention to favorite books. The call was for "favorite book," but who can point to just a single book and call it their favorite book? The artistamps were printed on February 26, 2010.

The aristamp designs are based on scans of four book covers.

A Pattern language by Christopher Alexander et al. is a unique handbook first published in 1977 and now has gone through 20 printings. Based on empirical observations that aim to identify a set of structural and spatial patterns of human buildings and communities that function well, sustain individuals psychologically, and appear inviting, this book is subversive to what architects have been doing the past 30 years. Nikos Salingaros calls A Pattern Language "one of the great books of the century." One could say any century.

A Glass Face in the Rain is a 1982 collection of poems by the late Cascadian poet William Stafford. Stafford's poems are often set in the western United States and contain a certain affirmation, confidence, and optimism that we find attractive even in the face of darkness. These poems embody the spirit of Cascadia.

The Brothers K by David James Duncan is a wonderful epic novel about the Chance family and set in the 1960's Vietnam War era. A coming of age tale about four brothers and twin sisters incorporates a number of interesting ingredients: baseball, fundamentalist Christianity, humor, and the response to circumstances that we personally lived through.

The Shock Doctrine by Naomi Klein is a critiqueof contemporary capitalism in the wake of wars, terrorist attacks, natural and human-made environmental disasters, and self-inflicted financial crises where the corporate state uses public disorientation to impose control through a mix of privatization, further deregulation, repression of unions and other opponents, reductions in social spending, and police/military repression. This all works, up to a point where reality overwhelms shock. The unfolding scope of degradation resulting from the oil spill in the Gulf of Mexico is a case in point.
Posted by Jack at CASCADIA ARTPOST at 11:58 AM No comments: