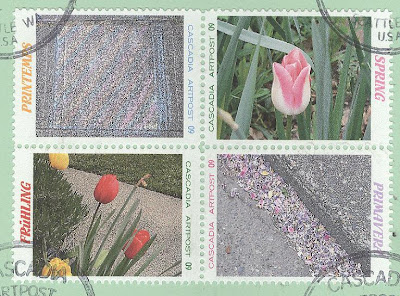 It is the spring season in Seattle, though in many respects April still seems like Winter In America. Seattle's weather has been five to ten degrees cooler than the average, with snow falling this past week on the morning of the second day of April. The economy of the United States continues to contract, with official unemployment climbing to 8.5% and General Motors teetering less than two months away from probable bankrupcy. Activities on the street seem to be going on as before, yet daily conversations tend to veer toward some topic of worry and concern.

But pay attention - there is still beauty to note in the world. Here in Cascadia, the Pacific Northwest region of North America in the Northern Hemisphere, the cherry tries are beginning their bloom, bulbs are poking out of the ground and breaking out in colorful flowers, and the days grow longer.

Cascadia Artpost commemorates this season by reproducing four scenes photographed from past springs. The two pictures of tulips were photographed in 2005 on the street outside my apartment. One year ago, I was walking with my camera down the street of our current residence in the Ballard neighborhood of Seattle (often I take a camera with me to document the environs as I walk) and noticed the childrens' chalk drawing on the pavement. Walking farther and crossing the street, I couldn't help but notice the accumulated flower petals in the gutter.

Seeing and perceiving shape our daily outlook on life. The Cascadian poet William Stafford (1914-1993) once wrote a poem about this:

You learn to like the scene that everything
in passing loans to you - a crooked tree
syncopated upward branch by pre-
established branch, its pattern suddening
as you study it; or a piece of string
forwarding itself, that straight knot so free
you puzzle slowly at its form (you see
intricate but fail at simple); or a wing,
the lost birds trailing home.
These random pieces begin to dance at night
or when you look away. You cling to them
for form, the only way that it will come
to the fallible: little bits of light
reflected by the sympathy of sight.

Posted by Jack at CASCADIA ARTPOST at 4:18 PM No comments: