Transmission on this frequency is now closing... 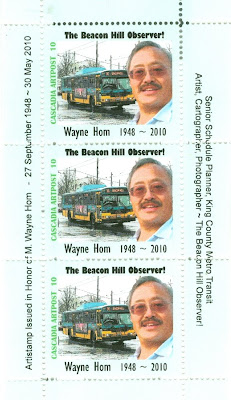 Wayne Hom 1948 - 2010
On the evening of Wednesday, 26 May, I received an email from friend and former co-worker Wayne Hom, sharing his news that he had been diagnosed with liver cancer. I telephoned him immediately, and he spoke as if he did not expect to live very much longer. We arranged for me to stop by his residence for a visit on the following Saturday.
I spent the rest of the week trying to grasp this news. Wayne had been a senior scheduler at King County Metro Transit for many years, and I considered him a valued colleague in the planning of changes to public bus service in the Seattle metropolitan area as well as a close friend.
When Saturday arrived, I took several buses to reach Wayne's house and on the way stopped at a Mexican restaurant to pick up lunch for us to share. I arrived just before 2:00 p.m., and for the next three hours we talked about everything, from the lastest developments at Metro to his medical condition and spiritual matters. Except for stiffness in his joints and feeling tired, Wayne was not in pain, and actually seemed in a good frame of mind. About his medical prognosis, he said with a smile, "That's life, everybody has to go sometime." His approach was to take each day and try to have the highest quality of life that he could manage. At the end of the afternoon, we talked about my visiting again in the next week. He shook my hand and thanked me for stopping by.
On 31 May, I learned from his sister-in-law that Wayne had passed away on Sunday morning, 30 May, with his family present. Yesterday, 10 July, the Hom family held a celebration of his life. At the celebration, I presented a framed sheet of an artistamp I created for Cascadia Artpost to honor Wayne. The artistamp shows a picture of Wayne from his last trip to China, superimposed on a scene with a Metro Route 36 trolley bus serving his Beacon Hill neighborhood in Seattle. Wayne was a frequent observer of bus operations, so much so that we at Metro called Wayne "the Beacon Hill Observer." This was an appropriate monniker for the artistamp.
Wayne used a phrase on his telephone answering machine, "Transmission on this frequency is now closing ..." which mimicked the closing message from the BBC's shortwave radio Caribbean relay station. I'll always remember that message in thinking about him. Wayne was an excellent friend, a super competent transit scheduler, a perceptive observer of the world, a talented graphic artist and photographer. I'll miss him.
Posted by Jack at CASCADIA ARTPOST at 4:33 PM

Ooohhhh.... I'm so sorry. I lost an arty friend earlier this year to cancer, way too young. Still miss her.....
Hugs to you. And what a lovely way to remember him, too!

My condolances on loosing a friend. As we get older we are forced to say goodbye to others. Just untill someone says goodbye to us.

A sweet remembrance to a friend. Life is all about single moments that fit together.

Incredible posting . . Thanks for sharing. So sorry for the loss of your friend.
All the best from North of the drawn line
D.