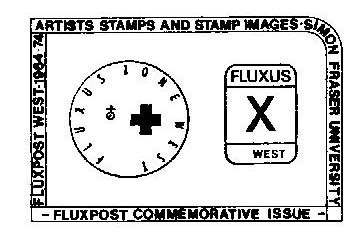 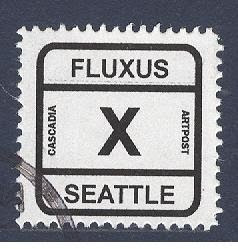 The first black-and-white FluXus artistamp originated from a design by Wolfgang Feelisch in 1974 that was used by Ken Friedman in mail art exchanges, according to Chuck Welch's Eternal Network, A Mail Art Anthology (University of Calgary Press, 1995). The logo was quickly adapted and spread in the mail art network. Friedman used Feelisch's design along with an emblem for Fluxus Zone West by Joseph Beuys in a 1974 artistamp commemorative, and both designs were later copied for a Fluxus Postal Kit.

In this tradition, Cascadia Artpost produced its Fluxus Seattle artistamp in November 2009. Also designed and printed was a similar Fluxus Bellingham stamp for Rudi Rubberoid in Bellingham, Washington to facilitate exchanges in the Cascadia network.

Both the 1974 Fluxus West stamp and the Fluxus Seattle stamp are illustrated above.
Posted by Jack at CASCADIA ARTPOST at 5:22 PM