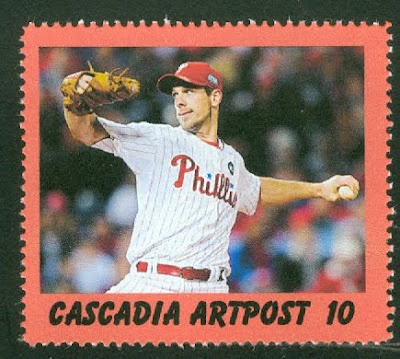 This quickly composed artistamp commemorates the December signing of free agent pitcher Cliff Lee by the Philadelphia Phillies, a U.S. professional baseball team in the National League. The signing provides a competitive edge for the Phillies going into the 2011 baseball season, since Lee joins an already formidable pitching staff of Roy Halladay, Roy Oswalt, and Cole Hamels. We were born in a Pennsylvania city near Philadelphia, and so have always been a fan of the Phillies team even while living far away in Cascadia. How exciting to look forward to another championship season by our favorite baseball team!
Posted by Jack at CASCADIA ARTPOST at 9:29 PM