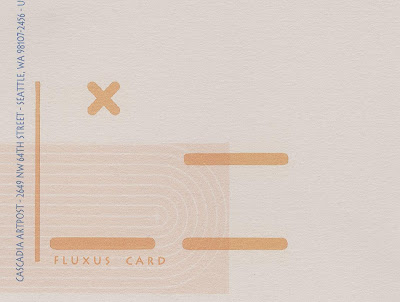 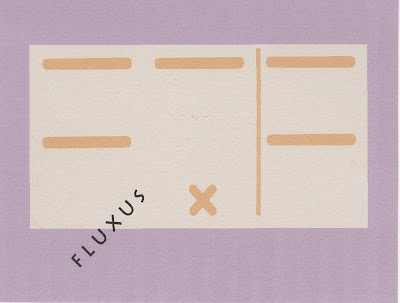 We were generally aware of the Fluxus movement during our university years in the 1960’s, through the music of John Cage and the works of artists like Claes Oldenberg. The name George Brecht only registered in our memory because his last name was easy to associate with the German playright Bertolt Brecht. Mr. Brecht, born George MacDiarmid, changed his last name while a soldier in the U.S. Army in Germany around 1945, because he liked the way Brecht sounded.

George Brecht again came to our attention in 2001 when we were delving into the history of artistamps and mail-art. The Fluxus movement – the word “Fluxus” means literally, “to flow” – created art directly from the world and invited the audience to participate directly in perception, cognition, and creation. Postal art and communication publicly through the international postal system became one expression of Fluxus, documented by Chuck Welch’s Eternal Network, A Mail Art Anthology (University of Calgary Press, 1995).

Although Brecht did produce some rubber stamps, we are not aware that he ever created any artistamps. Nonetheless, as a transportation planner we were fascinated with one of Brecht’s early works, Motor Vehicle Sundown (Event) to John Cage (1959), involving a gathering of a large number of disparate motor vehicles in a public space. As part of a retrospective of George Brecht’s work in September 2005, Museum Ludwig in Brecht’s hometown of Köln, Germany held a reenactment of Motor Vehicle Sundown in Köln’s central cathedral square with the artist present and directing traffic, so to speak. An eyewitness, Anna Dezeuze, described the experience:

“A crowd gathered, attracted by the unexpected grouping, but wandered rather aimlessly as the drivers of each vehicle performed such mundane activities as blowing horns, opening and closing doors, operating windscreen wipers and switching headlights on and off: there was no apparent order, no climax, no clear beginning or end. This was one of Brecht’s more Cagean works, and the simultaneity of the actions and large-scale organisation required to stage the performance are uncharacteristic of Brecht’s later, more minimal, work, but the deliberate sense of uncertainty is certainly one of Brecht’s most radical achievements.”
(Excerpted from Anna Dezeuze, “Brecht for beginners,” Papers of Surrealism, Issue 4, Winter 2005)

In Brecht’s own words, his art was a means of “ensuring that the details of everyday life, the random constellations of objects that surround us, stop going unnoticed.”

Brecht left the United States in 1965. After settling in Köln in 1972, he maintained a low profile until the Museum Ludwig’s George Brecht “Heterospective” in 2005 (the exhibition subsequently was moved in 2006 to Barcelona’s MACBA (Museu d’Art Contemporani de Barcelona).

George Brecht died on December 5, 2008 in Köln. Cascadia Artpost honors Brecht’s life and work with a pair of artistamps. The orange posterization is based on a 1960 photo of Brecht taken by Scott Hyde, while the blue posterization features a scene with the artist at Museum Ludwig’s 2005 Heterospective, from a photo taken at the event by Pietro Pellini.

A note about the Fluxus postcard:

On a trip to an antiques store with spouse and a friend in early January, we made the unexpected finds of a set of arithmetic flash cards and game cards with an interesting arrow in a “shock wave” pattern. Turned on their sides, the flash cards become something more than mathematical functions. These found objects immediately became appropriate subjects for a Fluxus postcard. We’d like to think that George Brecht would have noticed.
Posted by Jack at CASCADIA ARTPOST at 8:27 PM

Thank you so much for your posts!
I am learning a lot about things I was completely unaware!