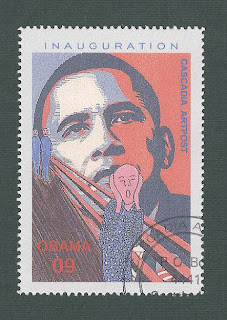 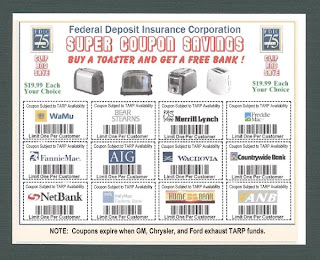 The Cascadia Artpost commemoration of Barack Obama’s inauguration as the 44th President of the United States brings together two iconic images to capture the contradictory impulses of the moment. In the background is a portion of the pop poster portrait of Obama drawn by Los Angeles street artist Shepard Fairey. Fairey’s image, variously captioned with “HOPE” and later “PROGRESS,” has spawned a number of parodies of other political and cultural figures, but nonetheless has become one of the icons of the 2008 political landscape. In the foreground, we overlaid our own drawing inspired by Edvard Munch’s “The Scream,” drawn in various versions by Munch between 1893 and 1910. Munch’s expressive image of manic anxiety captures perfectly the obverse popular mood in the face of dismal economic news and the global disarray of 21st century capitalism.

If the juxtaposition of these two contrasting images seems ambiguous, well, it is. Our suffering foreground image, drawn in an 8-inch by 10-inch size with color felt-tip and black drawing pens, has been portrayed in a cloak of white stars against a blue field, with two other watchful blue figures in the background. He/she is struggling with hands over ears to cope. Meanwhile, the steely centeredness of Obama’s image rises in the background. We have to admit that the feeling when we first combined the two images was pretty creepy. That’s one possible reaction. But an alternative response might be a possible tempering of the foreground panic by the reassuring solidity of the Obama image rising in the background.

Although originally prepared for an Inauguration Day (January 20th) exchange, the artistamp was mailed to a much wider list on a postcard satirizing a historic advertisement offering a free savings bank with the purchase of a toaster. A friend sent us the original image with the satirical coupons, which we modified to call attention to the TARP (the shabby acronym standing for Troubled Assets Relief Program) bailout of overextended banks and failing U.S. automakers using public funds (or, more accurately, public borrowing).

Our intent was not to saddle Obama with blame for TARP, but only to recognize the prior confining commitments (symbolized by a rubber-stamped vise) in place when Obama has taken office. Powerful financial and corporate interests are lobbying for continuing government financial support, while laying off thousands of workers as the unemployment rate climbs steadily toward 10 percent. Whether the Obama Inauguration may truly mark the beginning of a more hopeful era will depend on how well the rest of us lobby our own interests and the reaction to those efforts.
Posted by Jack at CASCADIA ARTPOST at 5:27 PM

Just came an read your text about your Obama artistamp.

Feel glad to see I had exactly understood your idea and intention when drawing it.
http://chrisjeanne.over-blog.com/article-27401108.html

I would have been ashamed if my feeling had not been faithfull.

I request your indulgence for my english expression... I'm French and only learned english at school, many years ago !!!

I received the other day the postcard with the inauguration stamp you sent me. THANKS!!!!!
I was really surprised, I do not know anybody in Seattle and for some reason I didn´t look in the internet immeadiatly... Yesterday I did, and I found you. I do not know why you sent it to me, but I really appreciate it, is beautiful!
mirta